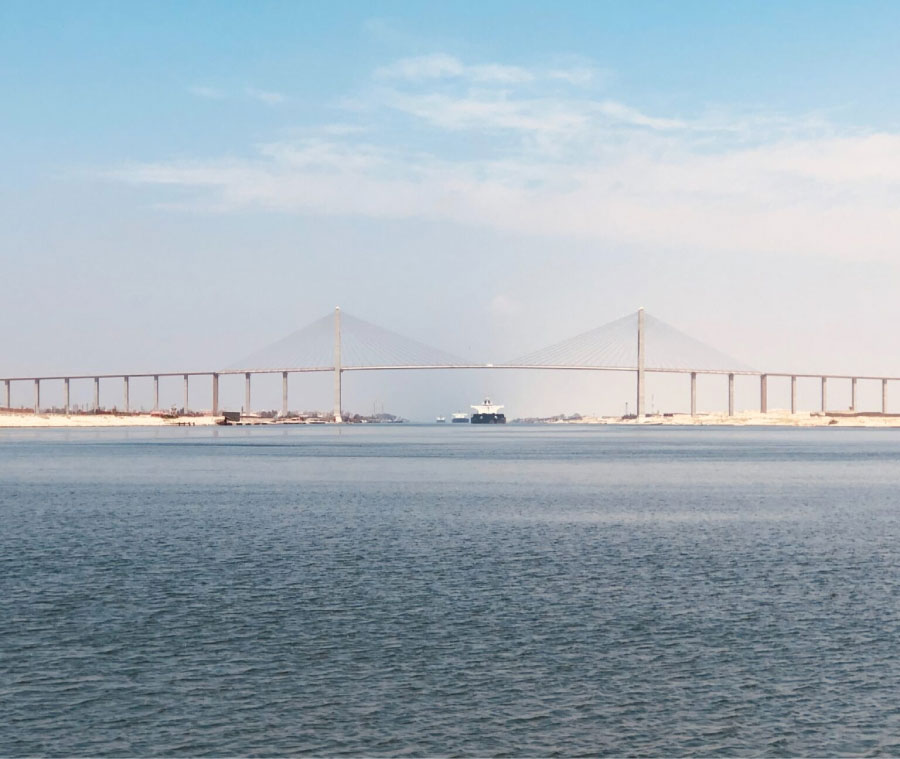 The Ever Given is an immense cargo ship owned by Japan designed to transfer goods from Asia and the Middle East to Europe and the United States. With a height of 400 meters and a width of 59 meters, the Ever Given is large enough to cause a problem especially through a narrow passageway such as the Suez Canal. By blocking off one of the main paths of transport, approximately ten billion US dollars’ worth of goods (4) a day were delayed when this ship became stuck during the month of April 2021. This is potentially very damaging to the economy especially when there could be perishable products within the 300 ships waiting for the blockage of the Ever Given to be cleared. The main causes of the blockage were found in a few days to be mainly due to the strong winds (31-45 mph) (7) that caused the Ever Given to create pressure pockets on the sides of the bank (Banking Effect). After six days of disturbance in global trade, by using high powered boats and digging around the points of blockage, the Ever Given was finally free.

This paper aims to identify the root causes of the Ever-Given ship blockage in greater detail. The conclusion includes recommendations which are for future ships and shipping companies to utilize in order to avoid future catastrophes of this sort. This research was conducted using multiple databases and news resources which include information about the math and science behind the 220,940-ton Ever Given becoming stuck and ultimately unstuck. Though current articles discuss the issues surrounding the ship blockage from a zoomed-out, ambiguous perspective, this paper aims to integrate branches of science in identifying and solving the issue at hand.

Part 1: Physical Parameters of Ever Given

To identify the root causes of the blockage, it is first necessary to understand the forces at play that allow for a massive ship of over 200,000 tons to float freely within a body of water. Model A above shows the different vectors of force present in the zb (vertical z-axis). As can be seen in the model, it shows buoyancy force, or normal force, which is the amount of force required to keep the ship afloat (assuming that the base is rectangular and flat). The model also shows gravitational force that is pushed down on the ship, which is approximately 9.81 m/s2. In order for the boat to float steadily on the water, the buoyancy force must be equal to the gravity force. However, if the buoyancy force is less than the gravity force, the ship will likely sink. To increase the buoyancy force, decreasing the total weight or increasing the amount of water surrounding the boat will be plausible solutions.

In model B shown above, the free body diagram shows the different forces acting on the ship in the x and y directions. As can be seen in the model, the x-axis shows the forces Fwind on xb (boat x-axis), representing the wind force. Since the wind on the day of the Ever Given getting stuck was very strong and unpredictable, the immense surface area of the cargo storage units allowed the wind to have great amounts of force which pushed the ship to create pressure pockets along the banks (bank effect). This drag force (Fdrag) that came from the vast surface area and strong wind caused the bank effect which resulted in the bow (front of the boat) being pushed away from the bank while the stern (back of the boat) was pulled towards the bank. Going towards the yb (boat y-axis) direction is the thrust (Fthrust) which is provided by the 80,000-horsepower main motor along with two smaller 3,500 horsepower motors (7). The Fresistance is essentially the water resistance from the acceleration of the boat. As the ship has a very large surface area on all sides of the ship, water resistance is a strong factor that slows down the ship. The yc (canal y-axis), which is horizontal across the model, shows the possible bank effect that occurs due to the pressure pockets formed.

As shown in the model above, the yawing acceleration can be calculated by taking out the separated angles (θ) produced by the yawing (twisting of the ship on a vertical axis). As can be seen on the left side of the model, two triangles are brought out of the x and y plane that represents the yawing movement produced by the turning of the Ever Given. By subtracting the force of Ftcosθ-Fwdcosθ, it will calculate the yawing acceleration along the y-axis. On the other hand, subtracting the force of Ftsinθ-Fwdsinθ will calculate the yawing acceleration along the x-axis. The side view on the right side of the model shows the buoyancy force in action with the gravitational force. Since yaw is the rotation on the zb (horizontal boat axis) axis, these equations resulting in the yawing acceleration can give an idea of how quickly the boat turned. Before the bank effect was in full force, the boat was constantly shaking side to side. This yaw value equation can be used to find the number of degrees the ship turned after each shake before the boat was finally stuck diagonally along the banks.

(assuming the ship is a rectangular “box” with length L, width W, and total mass M)

Volume of water the ship will displace as it floats (salt water):

Ship height (h) that will be underwater as the ship floats normally (salt water):

The ship will be 8.49294 meters underwater when it floats in fresh water.

Find Angle A: Use Law of Cosine to Calculate Angle Measure A

This angle shows that if the Ever Given gets stuck with its side along the bank it would have an angle of 71.565°. Although only the corners of the boat got stuck in reality, it is very common for boats to tilt and roll (along the yb axis) a certain number of degrees. In this case, the significance of angle A shows the degree of the tilt and gives physicists a better idea of how they can tackle the problem to free the Ever Given.

The model above shows the different angles that the parts of the boat have in relation to the original 90-degree direction of the boat. As the boat is shifted in a different direction these angles were calculated with the given values such as the 400-meter length and the 59-meter width of the boat. The measurements allow a different way to calculate the yaw moment of the yb axis.

Possible Solutions to Free Ever Given

The buoyancy force is essentially the force that is given to an object when it is submerged in water. This means the heavier an object is in water, the greater the buoyancy force. To make sure that the Ever-Given boat floats again, lifting force plays a critical role. This lifting force can be provided by using smaller boats to pull the boat out of the sand. The buoyancy force and lifting force are the forces that act against the weight of the boat and the frictional force from the two points where the boat is stuck. Once the lifting force and buoyancy force are greater than or equal to the weight of the boat and the frictional force, the Ever Given will float normally. In reality, the Ever Given was freed by multiple high powered smaller vessels that pulled on both the stern and the bow. This was combined with the removal of sand and silt under the points of friction. This resulted in 2000 cubic meters of material removed every hour and it took up to five days to free the Ever Given (5).

In conclusion, the Ever Given was displaced by wind resistance and pressure pockets formed according to the Bank Effect. Due to the Ever Given’s immense vertical surface area, strong winds would cause the ship to move significantly. This led to pressure pockets being formed between the ship and the bank which caused one side to be pushed or pulled towards the bank. Strong winds are a problem especially for ships with such size. In future operations and cargo shipping, it should be considered to make the ships less tall to minimize the vertical surface area to prevent wind drag. There are operations that are being implemented to prevent such blockage. For example, Egypt plans to expand the width of the Suez Canal by around 40 meters and possibly increase the depth. These changes that are going to be made to the Suez Canal can significantly decrease the possibilities for such disasters such as the blockage of the Ever Given to occur again.